Although starting castor oil business by setting up a complete castor oil processing using screw oil pressing method seems profitable and avaialble, it still have many things you should take into consideration, including plant location, technology and equipment selection, factory layout and functions partitioning, onsite installation and commissioning and more. 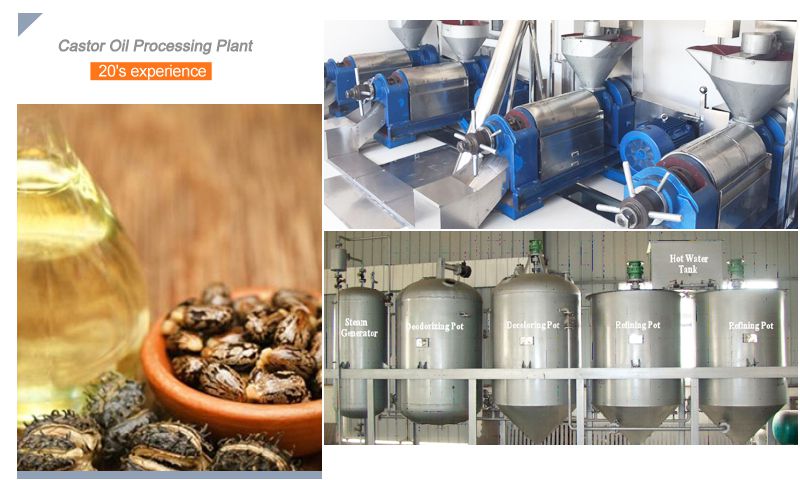 Castor plants are processed when they are ripe. First, ripe castor plants are placed outside on a hot day for drying. At some point, the plant will split open and the seeds can then be gathered.

The gathered seeds are set aside for dehulling which can be done manually or with the use of a hulling machine. The Decorticating Machine (Dehulling Machine) can also be used.

The dehulling process is very important and must be done with caution. After dehulling, the seeds are then cleaned and cooked. Cooking of the seeds is helpful in coagulation of the protein. In addition to this, cooking of castor seeds allows the pressing to be done easily and efficiently. (See More: Auxiliary Equipment in Cooking)

The filtered oil is crude and unrefined. Then, the oil is refined to get rid of phospholipids which are fatty in nature. Neutralization and bleaching process removes all colouration and oxidation substances from the oil. Lastly, the oil is deodorized. The deodorization stage is the stage where all strange odours are removed from the oil. (Read More: Mini Oil Refinery Plant Cost)

Castor seed is cultivated around about 30 countries in the world. Among them, India produces the most castor seeds and castor oil. The castor seed production accounts for up to 85%.  China and Brazil contribute 7% and 5% separately. Then, followed by Russia, Thailand, Ethiopia, Philippines, Jamaica, Nigeria, etc.

Castor oil, extracted from the castor seed, is widely used in many industries, such as biofuel oil, paint, lubricant, pharmaceutical, textiles and more. The major importing areas for castor oil is European Union, the United State, Japan, China, Thailand and more. Castor oil has very strong export demands around the world. Therefore, there are great potential to start castor oil manufacturing business in these countries where cultivates castor seeds.